The EnergyInnovations Sunflower-250 has received a fair amount of press lately as a concentrator-photovoltaic system.

After taking a look at the description and artist's impression I was certainly curious. There are several obvious problems. First, the artist's impression shows that the mirrors are self-shading each other, reducing the available irradiance. I also had serious concerns that the system, being horizontally mounted, would have inferior performance outside of the summer solar noon.

I decided to model the system at solar noon on June 21st and December 21st in Pasadena, CA -- latitude 35^ North. This corresponds with the sun being at 10.5^ and 57.5^ to the horizontal on the summer and winter solstice, respectively.

I made the following assumptions about the system:
With an area of 1.613 m^2 and irradiance of 1000 W/m^2 the mirrors, if totally flat, will see 1586 W on the summer solstice and 866 W on the winter solstice. After simulation in Zemax, I found the actual power on the collector to be 1224 W for the summer and 804 W for the winter. Given their claim of 200 W output, assuming 1000 W/m^2 irradiance, discounting atmospheric scattering, on the best hour of the best day of the year the PV unit would have to have an efficiency of 16.4 % to achieve this. The actual insolation is more like 850 W/m^2 for the Pasadena region at that time.

The summer configuration has a ratio of 0.77 between the power on the mirrors and that on the collector, giving an overall concentration ratio of 15.86 x. This is well below the 25 x quoted by EnergyInnovations. It is possible to increase the concentration ratio by shrinking the collector to 254 x 254 mm, but at the expense of about 10 % of the overall power. The following image shows the irradiance map on the collector, with the red box measuring 254 x 254 mm (the size of one mirror). At solar noon in the summer, the sun is nearly directly overhead and the unit does a good job of evenly illuminating the collector. 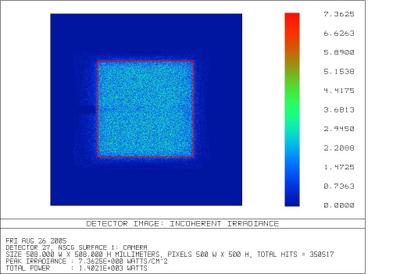 In the winter, the system does better: the ratio is 0.93. This is an interesting result, but it can be explained by examining the mirror configuration. Here is a rendering of the system in its winter configuration: 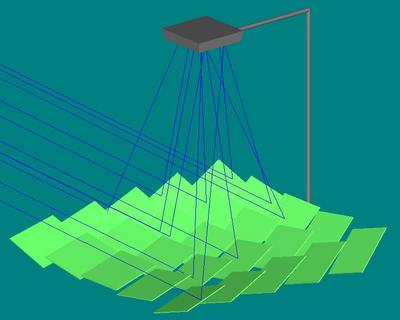 As you can see, while there is significant shading of the rear mirrors, the overall shape of the system is no longer particularly flat. Instead it forms a curve, to catch more of the sun's rays, improving the overall performance. This result was somewhat surprising.

However, this is not necessarily a positive result. For one thing, the horizontal angle greatly decreases the irradiance available in the winter. For example, a flat plate PV system set at 35^ to the horizontal would see 1470 W on the summer solstice and 1490 W on the winter at the given 1000 W/m^2 intensity. At high angles of incidence, the horizontal layout only has a narrow cross-section to the sun, greatly reducing winter performance. Worse, due to the high angles, the presented cross-section of a mirror looks less like a rectangle and more like a trapezoid. The narrow cross-section results in uneven irradiance on the collector: 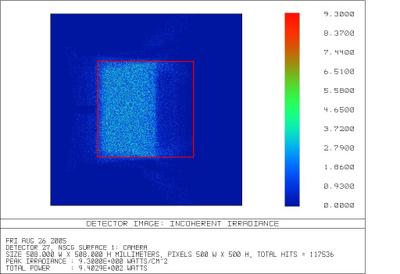 As you can see, a large part of the collector isn't receiving light. This is a fundemental issue with the use of flat mirrors. Partial shading of solar cells tends to decrease the performance of the unit as a whole, by creating a leakage current in the shading region. When electron-hole pairs aren't being actively created, the dispersion layer between the p and n-doped semiconductors is not as strong. The following journal article goes into some detail on the performance issues:

Note that the unit will have the same problem in the morning and early evening. This uneven illumination of the PV unit will probably shorten its lifespan, although they have added a fan to try and reduce the temperature gradients.

Of course, this totally ignores the effect of diffuse light, which as I noted before, cannot be effectively concentrated by mirrors. Clouds, smog, haze; all will have a ruinous effect on the performance of this system. Note that in EnergyInnovations' Frequently Asked Questions, there isn't a single mention of the world cloud.

After doing this analysis, I can't help but be cynical. It seems to me that this device is being designed to maximize its peak power output (Wp) rating, not its annual capacity factor (kWh/year). The system will suffer from performance losses due to cloud cover, the horizontal layout, and current leakage from uneven photovoltaic irradiance. Why would someone design a system optimized for peak output? Aside from the obvious marketing value, there is another reason if you are familiar with California solar subsidies. California's PV subsidy program has a loophole in it big enough to drive the governator's Hummer through: the subsidy is paid out at $2.80 per peak Watt. The actual annual power production is not considered, because net metering is not required. This has lead to a number of absurd installations on homes, like where the panels are installed on North facing roofs or in the shadow of a large tree. This is in stark contrast to German subsidies, which are for the real power produced. The big question would seem to be, will the new Million roofs program fix this loophole? So far, I haven't been able to find out.

I believe you left out the economic argument specifically the customer's ROI. The system has to deliver on that no matter what the performance or it will fail in the marketplace.

The other factor is that clouds are relatively rare in some parts of the world, and a system which relies on concentration (e.g. the Luz trough system, solar power towers) is not handicapped much.

It's another story entirely in Michigan (2nd cloudiest state to Alaska, I believe).

It's not practical to examine the ROI until there's a list price. Even then, because the system is weather dependant, it's very difficult.

Moreover, I'm not sure that the question is pertinent. In California, people aren't buying solar because it's a good investment. They are buying the 'blue' polycrystalline panels because they've become a sexy status symbol. They're great for parties -- everyone gets drunk and looks at the meter spin backwards. I think the extent of research into most home solar is to look at the price and power output.

I doubt very much that even Californians are sitting around drinking white wine and watching meters spin backwards during evening parties.  (Some stereotypes have a basis in reality, but that's just silly.)

I have nothing against people going solar because it's fashionable.  Not even Californians.  The more people who do it (and make profits for the PV industry and help it roll down the experience curve, making each new watt cheaper) THE BETTER.

LOL, you think I'm joking. I'm not. It's called a pool party.

Renewables can still fall flat on their face, just like they did after the last oil shock. We may be running out of light crude oil, but there is a ton of coal/heavy oil/gas available out there. The last thing the solar power industry needs is another glut of manufacturers making bogus claims. Solar still has a credibility problem. Most lately this has come from Chinese vendors, but American manufacturers are not immune from hyperbole.

I believe I read each Sunflower will cost between 3 to 4 hundred dollars US.

Did you read the Wired article?

No, I hadn't seen that article. The Conchoid of Nicomedes is probably just a differential equation by another name.

It is possible to get a more even irradiance than I've shown at high angles, but it requires you to remove the independance of the azimuth and elevation of each mirror. I'm not sure that you can do much better without linking the two variables. I could be wrong, however.

It pretty much has to come in at under $300 to beat flat panel PV. I can buy an equivalent power output PV panel for about $750 commercial. PV has no moving parts to maintain, can be mounted at an angle, and doesn't suffer so badly from diffuse conditions. The panel they're using would retail for about $80 if it's basic poly-Si.

I doubt very much that any failure of the Sunflower is going to bother Sharp, Kyocera, Evergreen Solar, or the utility buyers of those 37-foot Stirling dishes either.

This isn't the time when one failed company can tar an entire industry.  GM's quality goes to pot, and people buy Toyotas instead.  Kyocera has a $13 billion market cap; it's going to stand behind its warranties.

It pretty much has to come in at under $300 to beat flat panel PV. I can buy an equivalent power output PV panel for about $750 commercial.

Really? Did you catch this paragraph from the Wired article?

How big a challenge Gross' solar concentrator will be to conventional PV panels should start to become clear when his first 1,000 beta units begin rolling off the assembly line this fall. Energy Innovations' figures show that the Sunflower has a 30 percent cost advantage over typical PV panels before rebates and, in most locations, an even bigger advantage after. Consider a hypothetical Los Angeles light-manufacturing business with 35,000 square feet of roof space. A $684,000 investment (after rebates) in PV panels would generate 90 percent of the company's annual power needs and save roughly $52,000 a year on its electric bill. An array of 750 Sunflowers would deliver the same benefits for $228,000.

I take the advertising numbers for what they are.

I believe they're using Sunpower PV, which is supposed to be about 20% efficient.

This is Bill Gross, founder of Energy Innovations. I'm VERY impressed with the analysis you did on the Sunflower, and I'd love to talk to you further about the design, and correct some assumptions, and see if there's a way to work together. I haven't been able to find your email address to write you, but if you could write me that would be great. I'm bill@energyinnovations.com or bill@idealab.com.

Have you been paid out yet for your silence, maybe a job?

They have won you over with their efforts to solve these issues.
Interested in your response!
This is part of my renewable energy assignment so whole class looking forward to your feedback.

please send me an email

I am curious how you modeled the "NSC Source" in Zemax. I am looking for a high fidelity model of AM1.5D. Specifically 300nm - 2500nm with 10nm resolution. Thanks for any help