The plug-in hybrid is a hybrid electric-gasoline powered automobile that has a significantly large battery capacity. Unlike the normal hybrid it can be plugged into the utility grid, allowing its batteries to be charged up with electricity rather than the gasoline engine. Some people like to call the plug-in hybrid the GO-HEV (Gasoline Optional-Hybrid Electric Vehicle). Personally, I have a pathological hatred of acronyms.

Since most people only commute a short distance every day, the plug-in has the potential to shift the majority of the transportation load off oil and onto electricity. At the same time, the plug-in hybrid retains the range and acceleration of its simpler basic hybrid cousin.

According to the Office of Energy Efficiency (of Canada) the total annual energy consumption of the passenger transportation sector was 1,322.4 PJ in 2003. That number corresponds closely the with the gasoline consumption of the nation. The freight transport sector consumed 945.8 PJ (mostly diesel). The total overall energy consumption was 8,457.3 PJ, so passenger transport consumes about 15.6 % of the total energy production of the country. About half of the cars on the road are driven less than 30 km a day. Current plug-in hybrid technology is easily capable of meeting this demand. Thus, in a country of about 33 million people, the plug-in hybrid is realistically capable of shifting 500 PJ of load from oil to electricity. This works out to about 11.5 kWh per person, per day! That's a lot of electricity demand. I personally only consume about 7 kWh per day, and I live alone, have electric baseboard heat, and an electric range.

The major drawback of the plug-in hybrid is its higher capital cost from the extra battery capacity. The other issue of the plug-in is that it is hardly a better solution if the electricity comes from coal or some other polluting resource.

The solution is two-fold. The first solution is to give the utility companies charging control over the plug-ins. This necessitates not only a 220 V wall plug, but an internet connection for a plug-in hybrid. The other side of the plug-in hybrid coin is a feebate program to reduce the associated capital costs. I will have to talk about that in another post.

The advantage here is that it creates a large, flexible demand for the utilities to fill (obviously the utility will have to guarantee a given level of charge in the morning). Why does this matter? Let's take a look at Texas' daily ramping power demand: 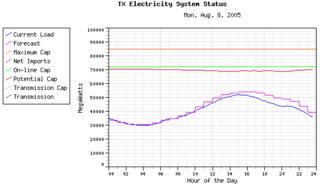 We can see that the demand varies from about 30,000 MW in the early morning to a peak of 50,000 MW at mid-day. Texas' grid is almost completely independent of the rest of the USA. There's probably less than 1000 MW of transmission connectivity between Texas and the outside world. That's a big shift, as it means during the course of a day almost 70 % more capacity has to be warmed up and brought on-line. Generally speaking, this doesn't happen. Power produced in the morning is often simply wasted (known as power shedding). Giving the utilities control over charging hybrids will give them the ability to fill in that valley, operating more efficiently by smoothing the demand variance, or having the demand follow supply rather than the other way around. Of further benefit, it will allow much more reliable forecasting, so power will not be wasted by overestimating demand.

Just how much flexible demand can the plug-in hybrid create? Consider that I claimed plug-in hybrids could supplant 500 PJ per year for Canada, and Canada consumed about 1900 PJ of electricity in 2003. Then slightly over 20 % of total electricity demand could become 'flexible' through the wide-spread introduction of the plug-in.

Of course, plug-in owners need to be compensated for providing this service to the utilities. Collectively, transmission services such as load-following, voltage-regulation, spinning reserve, etc. are known as ancillary services in the grid world. With controllable demand, the plug-in can take over many of these functions when acting as a demand sink. How valuable are ancillary services? Typically they will run from $0.01 - 0.03 / kWh, a significant chunk of the cost of electricity. If plug-in owners are paid for the ancillary services they are de facto selling, and their rates are reduced appropriately, they could see a very significant reduction in the cost of running their vehicle.

This flexible demand is valuable now, with our current energy grid. If we introduce more and more intermittent sources (i.e. wind, solar, tidal, wave), that flexibility will become even more valuable. Hence renewables and the plug-in hybrid are complementary technologies.

This idea of course, will go nowhere without government intervention. As hybrid vehicles become more common, and the introduction of the plug-in appears on the horizon, it would be prudent for governments to establish rules reguarding their use and interaction with the grid. Otherwise we risk extra-strain on the grid, as demand skyrockets whenever rush hour ends and millions of plug-ins start eating electrons.

Dear Sir,
I have recently started a blog dedicated to climate change. The
blog primarily covers important issues in climate change along with a
few campaign links. There is however a sister site that is prominently
linked from the main site, and this site is dedicated to providing
links to the reports used in the composition of my blog. Please take a
look and decide if you think my site is worth linking to, or
mentioning on you're site.

Sure, I'll add a link to your news blog in my links section.

I doubt that BC could get huge amounts of energy from solar, but you seem to have hydro potential out the wazoo.

I think you're half right. I got my numbers from the Energy Use Data Handbook:

One good thing about trying to model economic issues in Canada: Statistics Canada is the best.

Anyway, the amount displaced is correct, about 500 PJ is removed from oil consumption. But you're right, I forgot that the hybrid is flat out more efficient than the gas burner. E.g. it's a lower entropy or higher exergy process, take your pick of which flavour you prefer. As such, my estimates for the amount of scalable demand available to the utilities is too high. I'm not sure if that's good or bad. They need less extra production capacity but have less flexibility in the demand side.

In your case, the 6.5 kWh/day maximum is roughly equal to your daily consumption for other purposes.  Using vehicle-to-grid technologies the car could provide load-levelling on the supply as well as the demand side.  (AC Propulsion has a lot of information on this.)

The total power shift available depends on the size of the grid connection, of course; you're not going to offset the draw of an electric stove with a connection through a 16-gauge extension cord.  On the other hand, being able to manage demand by ±1500 W per vehicle on a time scale of seconds would be an enormous advantage for the utility; they could eliminate other spinning reserve completely and use their active capacity 100%.

You linked to a demand graph for Texas, showing a peak demand around 55 GW.  I did a quick stats check and found that the population of Texas is about 21 million.  If half of them are licensed drivers (perhaps an undercount) and there is 1 vehicle per driver, that's 10.5 million vehicles; multiplying by 1500 watts each, I get ±15.75 GW of potential grid regulation capacity.

Then there are the other factors, like the electronics being able to consume or produce VARs on command.... oh, this has the potential to be a utility manager's wet dream.

"the electronics being able to consume or produce VARs on command.... oh, this has the potential to be a utility manager's wet dream". This is the single largest obstacle to the widespread successful commercialization of plug-in vehicles. Utility companies are well aware of all the grid benefits of demand curve leveling described in your well written article here. But they much prefer to modify consumer behaviors through cultural change, not more commercial engagement of consumers beyond their billing meters. They loathe the mere thought of interacting with consumers in real time because of the huge additional costs they would have to bear for all the extra customer billing management, and especially the in-home electronics to handle discrete real-time electricity transactions for vehicle charging.
It's too bad because consumers are accustomed to real-time discrete purchasing of most other consumer products, including other energy sources too like gasoline etc. As an electronics engineer I can also confidently claim that the electronics technology to realize this capability for utilities is not rocket science, and has in various forms already been developed. There is simply no easy way for utility companies to pay for it in their heavily regulated world, and as long as our sleepy regulators are afraid to change the ballgame for them, it will be a very long time before we see our utility companies embrace this sort of technology.

How To Make money with affiliate programs Today. Affiliate marketing is the easier and probably the most effective method to make money from the internet. It is basically, a kind of selling technique where potential buyers from your website are directed to the websites of sellers. For every click, the website owner gets a small commission.
www.onlineuniversalwork.com