I recently read Peter Odell's Why Carbon Fuels Will Dominate the 21st Century's Global Energy Economy (2004). Peter Odell is obviously the polar opposite to the peak oil/global warming doomsayers. Odell basically states that, as a proportion of our energy consumption, coal was the primary fuel of the 19th century, oil of the 20th, and natural gas will be the carbon fuel of choice for the 21st century. This is the first real book that I've read on carbon fuel issues, so I am going to give it a very heavy-handed review. Later I'll probably give the same treatment to Campbell or one of the other peak oilers.

Odell points out that as nations move into the post-industrial age, their economic energy efficiency improves. This is due to the fact that industrial activities, such as the production of steel, are inherently energy intensive. Service industries, in contrast, are much more energy efficient. Technology also plays a huge role in energy efficiency. The USA, for example, has seen economic growth in terms of percent GDP, outstripping the growth in energy demand for a while now. 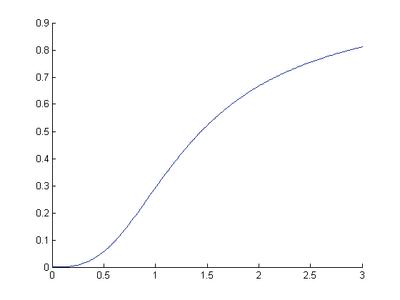 Relationship between Energy Use and Economic Development over Time
Odell proposes that nations progress along the above curve as they develop, and that most of the developed nations are already on the plateau. Presumably China and India are on the steep part of the curve as they industrialize. This isn't the graph from his book, I just created this in MATLAB using the function 1/sqrt(1+x^2) but it closely mimics the shape of his curve and concept of an ultimate energy consumption limit. This curve converges to 1.0 as time goes to infinity.

What this suggests is that due to a move away from industry, improvements in energy efficiency, and the slow-down in population growth that energy consumption will eventually stabilize. Odell, while he presents this concept, oddly did not attempt to fit any nation to this shape. This is unfortunate as it would be very interesting to see where populous developing countries like China and India are on the scale.

Odell also focuses a lot of the development of unconventional oil (e.g. tar sands) and unconventional gas (e.g. coal-bed methane), and how they extend the lifetime of those resources. Odell claims that conventional oil will peak by 2030, but that due to the growth of unconventional sources overall oil production will not peak until 2060. Odell thinks that gas production will pass oil in 2040. The peak for natural gas will not occur until 2090, but by that time the world will have consumed 90 % of gas reserves. While he clearly believes in the long slow plateau for oil, he still shows gas going into a nose-dive after its peak.

Odell briefly presents the theory of abiogenic origins for hydrocarbons that was developed in the Soviet Union. Essentially the theory states that hydrocarbons are produced by chemical processes deep in the Earth's mantle. They are then forced up towards the surface. Apparently some reservoirs in the former Soviet Union are found in the crystal zone for rock, where the heat causes a phase change from amorphous to crystalline. Odell takes this as the possibility that some existing oil and gas reservoirs are being fed by active conduits to the production zones deep in the mantle. Hence, they may be renewable. Furthermore there may be additional reserves much deeper down than the fossil theory of carbon fuels would suggest.

This does beg some fairly obvious questions to a layman such as myself. For example, why is oil and gas found primarily in sedimentary rock, which clearly hasn't worked its way down deep enough? Why doesn't oil or gas naturally find its way through rock formations to the surface? Why does it get stuck? If oil is renewable on the order of human lifespan, how come the world isn't swimming in oil? Odell points out that some 4000 papers have been published in the former Soviet Union. Unfortunately, that's very few papers over a time scale of 55 years. If many of them are in Russian, they aren't readable by the bulk of the scientific community and so they don't count.

I have a number of criticisms to make of the book:
Overall, the tone of Odell's book is that historical trends are likely to continue as is. I think a major reason for writing it is simply to counter some of the arguments of the peak oilers. His claim that natural gas will replace oil as the fuel of choice in the 21st century seems natural, assuming that renewable energy technology remains at a standstill. He does believe in the introduction of hydrogen reformed from carbon fuels, and sequesterization as a means to control CO2 emissions. He does not believe that the case for global warming has been made, but he does acknowledge that public opinion and government legislation will cause a shift regardless. Overall I find some of his theories intriguing, but I think his proofs are grossly insufficient. His attempt to predict world energy demand by sector for one hundred years is a bit silly. Science and technology can and probably will create paradigm shifts. He may as well written about the oil consumption of flying cars.

Peak oilers will probably be bouncing off the walls after this 10 page report from the NY Times Sunday Magazine.

Odell doesn't seem to grasp that solar is about to fall below the retail price of electricity in California.  As in, this year or next.  Solar will quickly displace gas-fired turbines as the price of natural gas continues to rise.

We can increase efficiency radically using cogeneration and GO-HEV's, and the GO-HEV's can also take energy from solar and wind.  It's that connection from grid to wheels that's missing, and when it starts taking off the whole paradigm espoused by Odell will start breaking down.  Carbon fuels will come to be used for aircraft, portable devices and chemical synthesis; for the mundane tasks of supplying energy to lights and such, they will be underpriced by electricity or one of its chemical surrogates (e.g. zinc).