Blogger is offering a new beta version of their blogging system. One of the 'features' of this system is that you cannot use your new Google account to post comments on original blogspot.com websites that haven't switched over.
Posted by Robert McLeod at 9/18/2006 3 comments:

And now for a trip to Buck Rogers in the 25th Century... One oft repeated concept in science fiction is that of power being generated in space by solar cells and then beamed down to the surface. Such a system requires three basic components: a collector to gather solar radiation, a transmitter to redirect the energy to the surface, and a receiver on the surface to transform the beam into electricity. See Wikipedia for an overview.

Space has a number of advantages for solar power. For one, a satellite in a high geosynchronous orbit (35,887 km altitude) is rarely shaded by the Earth. As a result, it is in sunlight about 98 % of the time. Also, there is no atmosphere or clouds to attenuate and diffuse the incoming solar radiation (insolation). A solar module in high orbit will receive the full 1367 W/m2 insolation. This compares well to ground based systems that average 250 (Arizona) - 125 (Britain) W/m2 with a peak of 1000 W/m2 at mid-day.

Concentrating optics − typically parabolic mirrors or Fresnel lenses − can be used in space without concerns over cloud cover diffusing the insolation. On the other hand cooling the solar modules becomes quite difficult as there is no atmosphere to advect heat away. As a result all heat has to be dumped through radiators. If one wants to use a concentrating photovoltaic arrangement it becomes necessary to have a cooling system with shaded radiators because the efficiency of most solar cells declines with higher cell temperatures. All this adds more weight to be launched into orbit.

The biggest overall drawback to any sort of space power solution is the cost of launching material into orbit. At the top end of the chain, NASA's Space Shuttle or the Titan booster cost approximately $10,000/kg to reach low earth orbit. Getting up to geosynchronous orbit requires an additional booster and increases the cost by a factor of 5-6. Programs such as SeaLaunch or the Russian Proton booster are cheaper but by less than an order of magnitude. Realistically, in order for space solar to have any opportunity costs would need to drop to $100/kg, which is nearly impossible for a Western company. There are all sorts of concepts for reducing the costs of launching satellites − air-launch, or the big-dumb booster concept − but none have the financing given the lack of a dependable market and high-profile busts such as Beal Aerospace.

The high capital cost of launch services has a secondary effect that it requires one to use expensive, high-efficiency cells rather than the one with the lowest price per unit peak power. This further hampers the ability of space solar of being cost competitive with ground solar.

In contrast to the cost, the energy required to place a solar system into orbit is not prohibitive. For a sea level launch from the equator the amount of potential and kinetic energy required is 56.5 MJ/kg. If you then include gravity losses during launch, drag with the atmosphere, and engine performance loss as a function of external pressure, the amount of energy required will increase but by less then 25 %. The impact on EROEI should be marginal.

A further problem is that satellites in geosynchronous orbit are outside the Earth's magnetosphere, leaving them open to bombardment by charged particles. This will drastically limit their lifetime compared to ground-based systems. A satellite in geosynchronous orbit will see a flux of 6·1013 (1 MeV electrons) cm-2 year-1 (with considerable variation year-to-year depending on solar flare activity). A 1 Mega electron volt particle is highly energetic and more than enough to break bonds and eject K and L-shell electrons from semiconductors. A solar cell in geosynchronous orbit will typically lose 5-6 % of its performance per year. Compare that to ground based units that are guaranteed to provide 90 % power after 12.5 years, or a loss of 0.8 %/year. We can see that even if a space solar panel receives 8× the insolation of a ground based unit, it will in fact produce less energy over its much shorter lifetime. The wikipedia article claims a lifetime of 20 years but that is not realistic. The economics suffer as a result.

The single greatest problem for space solar is transmitting the power from space to the ground where we use it. The most common proposal is to use microwaves for wireless power transmission. However, as people who have previously seen solar power satellite proposals will know, the satellite needs an enormous antenna and the ground station an even larger rectenna. The reason for this is the phenomenon of diffraction.

where 'a' is the distance to the first minima given 'λ' the wavelength, 'L' the distance between the satellite and the rectenna, and 'd' the diameter of the antenna on the satellite. The big problem that microwave power transmission runs into is the enormous wavelength used. The standard frequency for microwave transmission is 2.45 GHz (or 12.24 cm wavelength). This frequency is not attenuated much by the atmosphere or water vapour although it is already popular for mobile phones, which creates a conflict. As compared to visual light at 500 nm, the diffraction of microwaves is far, far greater (about 250000 x). 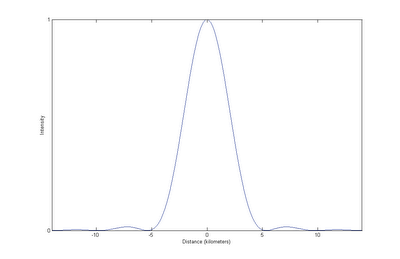 Figure 1: Ground intensity profile (Airy pattern)
of a 2.45 GHz, 1.0 km diameter geosynchronous transmitter.
As we can see from Figure 1, the size of the transmitter (antenna) and receiver (rectenna) are quite huge. The space-based antenna needs to be at least 1 km in diameter, which makes it far larger than any satellite even proposed by a major space agency.

The rectenna (or receiver) is quite simple but also extremely massive. To absorb the microwave energy in the form of AC power one simply needs to string a regular array of wires, each about 12.25 cm apart. Of course, the problem is that this pattern needs to be replicated over an area of 78.5 km2. That's almost 8000 hectares (or 20000 acres), which represents a fairly massive continuous landmass. I know that space solar advocates like to suggest that the land under a rectenna could still be used for farming, but it's large enough to cover several farms, there's going to be a huge NIMBY problem, and the sideband zones outside the rectenna will receive a fairly high dose.

While microwave transmission is quite efficient on the emission and reception ends there will be some loss in the atmosphere. The major portion of the loss comes from the microwaves that fall outside of the centre maxima of the Airy disk. Roughly 84 % of the total intensity is contained within the centre disk. The sidebands are not worth capturing. Overall microwave power transmission is usually assessed at 80 % efficiency, which is really quite good. Additional losses will come from power transmission over long distances.

It should be very clear that any sort of solar power satellite that proposes to utilize microwave power transmission is not a small project. Far from it, it requires us to construct structures larger than any ever constructed by the human race. Needless to say, this is not something you can go down to your local bank to get a loan to build. It's not even clear what countries could afford such a thing on their own. It's quite the antithesis of the small, incremental solar panel.

One possibility that I've been asked about before is using some sort of monochromatic emission (i.e. a laser) in the near infrared region to beam power from space to the ground. This sidesteps much of the problems with diffraction: using an infrared laser with an aperture of 1.0 m would only require a photovoltaic array on the surface with a diameter of 180 m.

The problem with using light near the visual spectrum is that our means of generation are not very efficient. One is basically forced to use a combination of laser diode emitter and photovoltaic receiver. Examination of the Air Mass standards gives a good idea of what regions in the near infrared are suitable for wireless power transmission. The best match is probably to use 2250 nm wavelength lasers coupled to germanium solar cells. This region has a transmittance of about 75 % through the scale height of the atmosphere in good conditions.

For emission, one would want something such as an array of quantum wire laser diodes. Laser diodes with quantum (very small) emission structures have become very efficient, recently reaching 70 % efficiency. Eventually we will probably see 85 % efficient quantum wire or quantum dot laser arrays. At some point, however, lasers have limits in their efficiency. A laser must be pumped with a higher energy electron or photon than the photon that it emits.

Photovoltaics can be significantly more efficient than normal because they can be closely tailored to the wavelength that is transmitted. Normally much of the inefficiency comes from light of the wrong wavelength losing some of its energy when a solar cell absorbs it. If the light incident on the photovoltaic panel can be well matched then the efficiency will increase markedly. Under one sun the theoretical efficiency limit for germanium (0.55 eV) is about 70 % and it is 85 % under heavy concentration as any beamed power system would be. The very best contemporary commercial cells reach about 2/3rds their theoretical limits. A reasonable assumption might be that we could achieve 60 % efficiency energy conversion of the beamed power by an photovoltaic array.

So to sum up, after sunlight is captured in space and converted to electricity we must convert it to lasing photons (0.85), beam it through the atmosphere (0.75), and collect it on the ground (0.85 for diffraction and 0.60 for photovoltaic conversion). The total efficiency of the system is 0.85 · 0.75 · 0.85 · 0.60 = 0.32. Thus while the infrared wavelength system is more practical from the perspective of scale, it's efficiency advantage over ground-based solar is marginal at best. Poor atmospheric conditions will render ground based solar more efficient and cheaper.

Even if a wavelength has good transmission through water vapour, it will still be diffused by contact with a cloud (which is after all condensed water droplets). Clouds cause diffusion because light refracts through the water-air interface of the droplets. Clouds are not 'transparent' to near infrared light, contrary to popular culture. For water droplets to be transparent to light, the wavelength of light needs to be larger than the dimensions of the water particles.

It should be clear by now that the transmission stage is the most nettlesome part of space solar power concepts. Is there a better concept available? Perhaps we should return to the KISS (Keep It Simple, Stupid) paradigm and look for a better way. Our objective is two-fold: deal with the intermittency aspect and increase the efficiency of our expensive photovoltaic devices.

One science fiction concept that might actually have an application in this case the ubiquitous space mirror. A parabolic mirror in space is capable of redirecting light from the sun to the surface with a fair degree of concentration. It will be able to redirect the largest amount of power during the middle of the night when it is on the far side of the earth from the sun and no power at noon. The bonus is, compared to a space-based photovoltaic collector, is that it can be extremely simple. Only a thin layer of aluminium on a flexible plastic substrate is necessary so the area mass density would be far lower than for a solar power satellite.

Prototypes of space mirrors have already been launced by the Russians (a later test in 1999 failed). An array of space mirrors would be able to provide more even insolation over the course of the day for a large array of photovoltaic panels. For a big solar farm in Arizona or North Africa, there could be a significant benefit to the intermittency as well as economic gain from extra power generation.