Hmm... so the price of housing and automobiles has been failing for awhile now. Now that another wave of the credit crisis is causing a commotion, the associated margin calls seem to have deflated the commodities bubble. So are we going to see a general fail in prices everywhere?

Are we now in a deflationary period? I was certainly one who believed that the USA would do anything it could to inflate its debt away. It was the logical strategy given the general level of in-indebtedness at all levels of US society. However, the destruction of rent-seeking capital seems to be pervasive and occurring in massive quantities. The Austrian school certainly says that deflation is exactly what we should expect at the end of a credit-driven bubble. The huge amount of leverage involved and the general cross-connectedness of the Credit Default Swaps (CDS) market seems to make the domino-effect of financial corporation failures unstoppable. In fact, the US Federal Reserve seems to have largely lost control over prevailing interest rates.

This isn't like the old inventory-driven recessions of the past thirty years. Structurally, it looks closest to the run-up to the Great Depression around 1924-29 when all the Austrian banks went down.

Fortunately I don't think we are likely to have another coincidental Dust Bowl event (and farming is not quite as important anymore) to match the horrible times of the Great Depression. However, if the financial sector were to shrink by half, bringing it back in line with historical norms, that would certainly result in a GDP shrinkage of > 10 %, meeting the technical definition for a depression.

Canada isn't going to side-step the fallout on this one. Any large scale demand destruction in the USA will hurt producers up here badly. Stephen Harper was bright to call an election when he did, but he would be well advised not to stick his head in the sand. The USA is inevitably going to become more mercantilist so let's move to get ahead of that, shall we?

I continue to believe that the way out of this mess is a drive to shift the developed economies of the world away from fossil fuels and into renewable sources of electricity. Any such drive would generate a lot of high-quality jobs, present many R&D opportunities for the productive employment of capital, and achieve some enormous environmental and security side benefits.

The lithium-ion batteries based on phospho-olivine (i.e. LiMPO4, where M = {Mn,Co,Fe}) crystalline structure have been the subject of a great deal of research over the past decade. A recent paper in Nature Materials from Gibot et al. has demonstrated some of the developments in the area and I'd like to rehash them here [1]. The paper demonstrates fabrication of a single phase LiFePO4 with very small particle dimensions. It's not an, "Oh my god what an amazing engineering development paper," but rather one of scientific interest to elucidate the difference between two-phase and single-phase Li-ion batteries.

LiFePO4 thus far seems to be the most impressive performer, especially from a safety perspective. It is produced entirely in solution (e.g. a beaker) by a chemical recipe. I don't know what the yields are like but the nature of the production method implies that it can be undertaken in large vats on an industrial scale.

Unfortunately, it suffers from poor conductivity characteristics. Two main approaches have been made to improve the conductivity of LiFePO4: (1) to coat the particles with a thin layer of amorphous carbon, and (2) to manufacture the LiFePO4 in the form of small nanoparticles (~ 40 nm average axial dimension). Of course, both approachs can be combined.

Adding carbon improves the conductivity but adds an, "electrochemically inactive," layer to the cathode material, hence reducing performance by adding dead weight to the battery. One can imagine that when you take a mass of Li-ion particles and sinter them together to form the cathode, if they've all been coated with carbon then there's an electronically conductive pathway from any buried particle to the electrolyte.

For the nanoparticle approach, presumably the higher ratio of surface area to volume reduces the ion diffusion length, but the literature also suggests that the introduction of defects to the nanoparticles may also improve conductivity. I know from experience that stacking faults (such as twins) can act as diffusion pathways for reaction species in solid-state reactions.

Normally the cathode material is really LixFePO4, where x = 0.5 - 0.75. This is (at least partially) as a result of the boundry between crystallites being composed of an extremely lithium poor phase (x ~ 0.03). The primary advance shown in the Gibot paper is that they made the nanoparticles small enough that only a single phase is found in each particle. To explain, if you are familar with the difference between monocrystalline and polycrystalline silicon solar cells, the sub-40 nm LiFePO4 nanoparticles are monocrystalline. Particles in the range of 100 nm are polycrystalline and hence have the low lithium phases present at the boundaries of each crystallite. Note that there's no fundamental electrochemical advantage to the monocrystalline approach as far as I know. 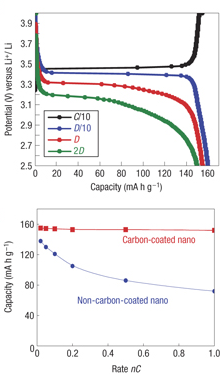 I infer from the paper that a big difference here seems to be in the lithium loading. Gibot showed by a variety of methods that their nanoparticle was loaded with more lithium (x = 0.82-0.92). However, their discharge performance curves aren't actually more impressive than existing LiFePO4 batteries with larger particles. Existing batteries have flatter discharge curves from what I've seen.

The real advantage for these monocrystalline nano-LiFePO4 is likely to be reversibility. As I've discussed previously, the volume of the crystal changes from lithuim insertion to deinsertion. This introduces strain into the crystal and after many cycles defects will form and degrade performance. However, in a monocrystalline material there's not a lot to break. The nano-LiFePO4 does have some substitution defects (Fe where Li should be and vice versa) but without the crystal boundries the defect density is likely to be lower overall.

Another potential advantage for the nanoparticle approach is that it requires less in the way of process temperature (108 °C versus 500 °C over 24 hours) compared to the traditional approach. That should make the manufacturing process less energy intensive and less expensive.