So least you readers think I am just being lazy in not posting, here is some photos from an avalanche safety course I took last weekend.  We were at Bow Summit for the practical (skiing) portion of the training, here's some pictures sans people. 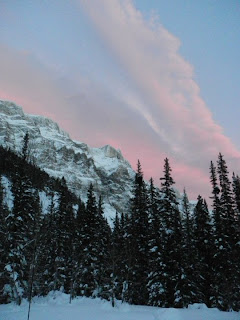 Sunset the night before. 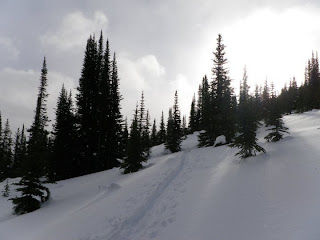 The skin track up. 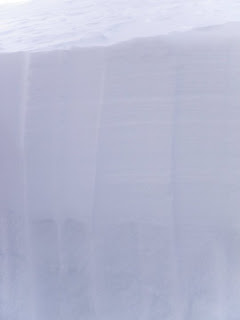 The snowpack is about 70 cm of wind-loaded slab on top of 80 cm of very weak sugary surface hoar. The interface is obvious in the picture. In other words very dangerous for slab avalanches.  The snowpack was surprisingly strong given how bad it looked (still very dicey over 30°), probably because the top slab was still fairly plastic.  We didn't hear any whumpfting (audible evidence of snow settling when skied over). 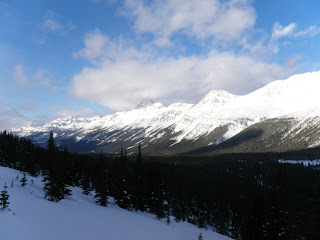 The view across the valley as the clouds broke up.  Ski touring is totally unlike lift-served skiing in tone.

Physical activity should be fun play-time.  I don't really get the emphasis on weight lifting in the paleo community, as it seems very boring to me.

M1 and M2 macrophages and the Herpes-virus family

What then determines which role an innate immune system cell body operates in at any given time and place in the body?  Let's look at monocytes/macrophages.

Monocytes are undifferentiated (i.e. unspecialized) immune system cells of the innate immune system that circulate in the bloodstream.  In response to chemical signals from the tissues adjacent to their blood vessels, they enter into the tissue to either fight infection or repair tissue damage.  When monocytes enter tissue, their gene expression causes them to become more specialized and they are then called macrophages (they can also become other immune system cells).  There are two basic phenotypes for macrophages, which are essentially the ying and yang of the macrophage community.
The differentiation of macrophages, from M1 to M2, is not all that distinct and is generally though to represent the two extremes of a continuum.   My reading suggests macrophage populations can make the transition from one phenotype to the other, without die-offs.  This is probably a bad thing for chronic modern diseases, in that many of the diseases that are as a result of macrophage dysfunction occur when apoptosis (programmed cell death) is impeded.

One of the beneficial effects of eating a diet low in inflammatory factors (e.g. fructose, wheat, smoking) is that the overall levels of pro-inflammatory hormones, such as cortisol or interferon, are low so the transition from high M1 expression to high M2 expression can occur more rapidly. I strongly suspect this is why most people who transition to the paleo-diet are much better able to put on muscle mass. As the Tidball article indicates, chronic exercise is another no-no because it doesn't give enough time for the M2 macrophages to enter and affect repairs, so the muscle is always in an inflamed state.

This doesn't, in general, appear to actually reduce the ability of the body to fight infectious disease, however.  This is probably because even though the overall inflammatory condition (as determined by circulating cortisol globally or cytokines locally) is low, it can easily spike when a foreign body attacks. On the other hand, actual conditions where adrenal functions are suppressed (i.e. Addison's disease), the immune system is hamstrung by the homonal milieu it finds itself in and the immune system doesn't function properly to defend against infection.  One hypothetical cause may be that the ratio of M2 to M1 is tilted in favour of M2 in adrenal insufficiency.

One pathogen that is known to mess with the M1/M2 expression in macrophages is human cytomegalovirus (HCMV). HCMV basically takes M2 macrophages or undifferentiated monocytes and reprograms them to be more like M1 macrophages in some ways (Chan et al., 2009 and Chan et al., 2008).  Importantly, they do not become like M1 macrophages in that they continue to release interleukin-10, which discourages the adapted immune system from deploying 'killer' lymphocytes (natural-killer cells and T-cells) but encourages more M2 macrophages (red shirts, basically) and at the same time they up-regulate the production of protein filaments that make macrophages motile, so that they can better travel about and infect other organs. So let's all remember, whenever you have massive infiltrate of an organ by macrophages, you can probably bet there's too much IL-10 being produced.

To me the various  pathogens that excel at molecular mimicry to hide from the immune system seem to be playing quite the bogey-man role in a whole host of chronic diseases. These are principally the Herpes virus family (which also includes cytomegalovirus and the Epstein-Barr virus which has been linked to chronic fatigue syndrome) and the bacteria C. Pneumoniae, which has been linked to atherosclerosis and a whole host of other chronic diseases. Paul Jaminet over at Perfect Heath Diet has also been covering C. Pneumoniae in the brain,

It also seems a lot of disease symptoms occur when macrophages manifest some combination of the M1 and M2 state.  Consider that glucose in the blood is regulated by the liver predominately, so insulin resistance (aka metabolic syndrome) reflects failure of the liver to be able to do it's job.  Largely, this is blamed on 'inflammation' in the liver, e.g. alcholic and non-alcoholic fatty liver disease, but what does that mean exactly?

A review (Olefsky and Glass, 2010) states that macrophages in tissue that produce excessive quantities of tumour necrosis factor-α (TNF-α) and interleukin-16 (IL-16) (both pro-inflammatory cytokines), to the point that they are detectable in the blood. I like the following quotation from the review, as it really lays out the problem:

That nearly half of fat tissue mass is actually not fat cells, but immune system cells is kind of amazing to me. A very similar thing happens in liver disease. Now, reference #32 is a mouse study (Weisberg et al., 2006) but it in turn cites two other mice studies that are more pertinent (Weisberg et al., 2003 and Xu et al., 2003).  Both articles show that gene expression for various proteins that attract immune system cells are strongly up-regulated in the adipose tissue of fat mice.  The question is why?  Is it diet?  I suspect partially, but the revelations regarding what cytomegalovirus can do to macrophages makes me suspect latent pathogens are attracting macrophages as lambs to the slaughter. Are lab mice susceptible to chronic infections given their conditions and short lifespan?  Are these latent viruses transmitted from mother to infant?

The prevalence of immune system bodies in the adipose tissue of the obese mice illustrates an example of the, "diseases of civilization," being largely driven by dysfunction of the innate immune system, probably egged on by latent viral and bacterial infections and an unnatural diet.  The pieces of the puzzle are mostly there now and evidence will continue to accumulate until we have a better view of the whole picture.  Stop the sources of inflammation (i.e. immune system activation), give the immune system the substrates it needs to fight effectively, and the other symptoms will go away.
Posted by Robert McLeod at 1/04/2011 4 comments: