Since I've been bleating on about the production of natural gas in Alberta for awhile, it's probably time to put up some data, pretty pictures, and make some predictions. I retrieved some data from the Alberta Energy and Utilities Board, both for natural gas production and also drilling rates. 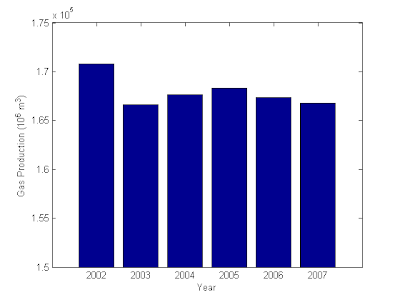 Alberta has been producing roughly 168,000 million m3 of natural gas per annum over the last five years as shown in Figure 1. Looks nice and stable with natural gas prices in North America being also rather low. No problems seen thus far. 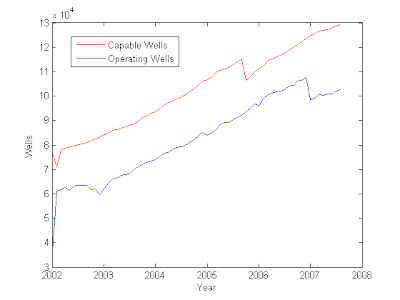 Figure 2: 'Capable' and 'Operating' wells in Alberta.
If we look at the actual number of wells in the province, as shown in Figure 2, it has grown greatly over the past five years, even as production has not. There are two discontinuities in the data, the origin of which are not clear. I presume it is due to some accounting methodology change. The number of operating wells has grown from roughly 61,000 wells in January 2002 to 101,000 wells in June 2007.

On the positive side, the difference between the number of available wells and those actually producing gas appears relatively stable. If this gap started to tighten up, it would suggest there is no more surplus capacity in the infrastructure. The natural result would be a rise in North American natural gas prices, notwithstanding the influence of LNG. 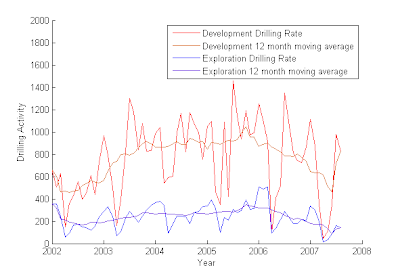 Figure 3: Drilling rates for new development (production)
and exploration of natural gas wells. End-points of moving
averages not considered statistically accurate.
So we have clearly established that for Alberta to maintain its natural gas production, it will need to drill more and more holes in order to offset the decline in existing fields. Unfortunately, the drilling data suggest that isn't going to happen. Rather, drilling rates for new production holes has dropped off from about 950 holes per month in 2005 to 650 holes per month now, a decline of about 30 %. Exploration of new sites is also dropping off at a similar proportion.

Now, obviously, this data has a lot of noise to it. One particular feature of interest is the drop-off in drilling in April that happens every year. Since April is the end of the financial year in Canada, my best guess is that numbers are being shifted for tax purposes. Still, I think the 12 month moving averages are stable enough to draw the inference that drilling activity in Alberta has dropped substantially from the peak of the 'boom'.

In conclusion, the general treads are clear. Alberta had a boom in natural gas production with activity peaking in 2005. However, that peak in drilling is over, and existing reserves are depleting rapidly. The shortfall will be shored up by coal-bed methane, but that method of natural gas production inherently has smaller production volumes per hole, and requires more extensive drilling. The data from the US Energy Information Admission on Canada's natural gas reserves suggests that this decline is being driven by geological considerations (i.e. we're running out of conventional natural gas) rather than the purely historical 'boom-bust' cycle of Alberta's economy.

The future of the natural gas industry in Alberta will, in my opinion, be largely determined by the degree to which liquefied natural gas (LNG) imports penetrate the North American market. If LNG can be delivered economically, Alberta natural gas will remain uncompetitive and this could be a real historical peak. On the other hand, if supplies tighten, prices will rise in much the same fashion as crude oil is now and we should see another boom period until the coal-bed reserves are fully covered.

Premier Ed Stelmach is to deliver a speech tonight regarding his decision on fossil fuel royalties in Alberta. I think that he has little choice but to raise royalties on bitumen producers, since otherwise he will face budget deficits in the future as the revenue from natural gas production declines.
Posted by Robert McLeod at 10/24/2007 4 comments:

Alberta Natural Gas Production to Decline by 15 % by 2009

According to Claudia Cattaneo of the Financial Post, "Gas Output to Plummet" weaves us a story of how conventional natural gas production is posed to decline 7 % per annum over the next couple of years.

Quote of the day:

"Drilling for natural gas is in a deep recession unique to Western Canada because of high costs, the high Canadian currency and less-productive wells as the basin matures."

Point number two is a red herring, the Canadian dollar was much lower when this decline in drilling rates started. It's certainly an issue now, as a subset of point one, but it wasn't the proximate cause. The real issue is point three, that the resource is in decline, which in turn means that the cheapest gas is gone. The North American price for natural gas remains rather low, so expect a squeeze, especially if LNG isn't deployed fast enough to cover the shortfall. As we saw in 2005/6, natural gas prices are considerably more volatile than oil, due to the less fungible nature of gas compared to oil.

Those bitumen sands upgrading operations that are relying on natural gas to add hydrogen to their asphalt better pay attention. If it comes down to a question of heating homes or running refineries, you're going to lose your supply.
Posted by Robert McLeod at 10/11/2007 1 comment:

In a new issue of the journal Nature Materials, there is an article about a new formulation of the lithium-iron-phosphate chemistry, but with sodium substituted for lithium. This is potentially advantageous from a cost perspective, especially as concerns have been raised as to whether or not their are sufficient proven reserves of lithium metal to convert the entire world's vehicle fleet to lithium-ion batteries. Sodium is vastly more abundant.

The citation is, B.L. Ellis et al., "A multifunctional 3.5 V iron-based phosphate cathode for rechargeable batteries," Nature Mat. 6:749 - 753 (2007). Nature only provides the first paragraph to the public, so I will try to provide a synopsis.

The basic formulation of the cathode for this battery is A2FePO4F, where A is either Li, Na or some mixture thereof (with a standard carbon anode). Most lithium-ion battery aficionados are aware that the phosphate chemistry is perhaps looked upon more favourably at the moment than nickel or maganese based ones. The substitution of the fluoride from a hydroxide (OH) is another innovation that results in a novel crystal structure.

The material seems to form favourably shaped porous crystallites with a very high surface area to volume ratio, as shown by scanning electron microscopy in the publication. The crystallites are about 200 nm across, which by my standards is still quite large (i.e. they have plenty of room to decrease it). The cells were producing ~ 3.6 V over a rather flat discharge curve, and maintained a capacity of 115 mA·hr g-1 after 50 cycles. That would correspond to a storage capacity of roughly 400 W·hr kg-1 for the battery bereft of any packaging.

Aside from the potential for replacing lithium, the authors also found little volume change when Na was lost from the NaFePO4F crystal. This implies there's not a lot of stress on the crystal during reduction-oxidation (i.e. cycling), and hence, it may imply a high degree of reversibility (i.e. a battery fabricated from the material may be able to handle many cycles without damage). The volume change was found to be 3.7 %, compared to 6.7 % for conventional Li2FePO4OH chemistry.

Right now they appear to be suffering from a carbon coating on their material that appears to be a result of their fabrication method. This is having a negative effect on the conductivity of the material, which would impact battery efficiency.

Overall, an interesting development that points to plenty of room left for chemistry advances in the area of battery technology. There is also a lot of room for this material in terms of its material science, being brand new and hardly optimized for performance.
Posted by Robert McLeod at 10/01/2007 3 comments: