The Difference between Economics and Physics

In economics, one assumes people are rational. In physics, one tests assumptions. 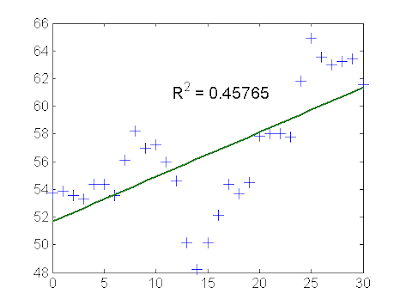 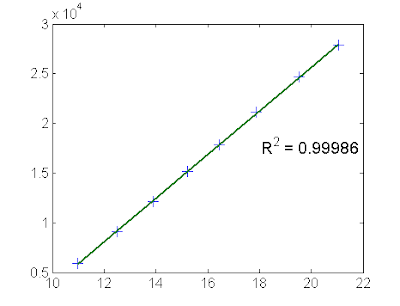 Both graphs feature real data of complicated systems. Both data should be linear, according to theory.
Posted by Robert McLeod at 2/15/2008 6 comments:

Phase-change Memory
Intel has recently shipped a beta-test commercial phase-change RAM (hat tip: Fraser's Energy Blog). I refer readers to the Wikipedia article on PCRAM for background. Phase change RAM relies on the application of heat to transform a rare-earth glass from a glassy (amorphous) to crystalline state. This is the same process that is used in writing to DVDs, except that instead of applying heat by a laser, it's applied by an electronic current. In a DVD, the index of refraction of the material can be altered, while for PCRAM the resistivity of the material is the method for storing bits.

Aside: that the EETimes.com article I linked states that the role-out of this product was delayed due to Intel not being able to get a big loan for its new subsidary operation. Another result of the debt bubble I guess.

Phase-change RAM is interesting from an energy perspective in that it non-volatile, i.e. it requires no power to store data, unlike conventional RAM. You only need to apply power when you want to read or write from it. It's also, apparently, much faster and robust than flash memory. Some of the discussion around this technology suggests that memory access requires around 5 ns, which would make it comparable to DDR2-800MHz RAM with standard memory timings.

Intel is delivering a testbed 128 MB chip, which is obviously on the small side for the moment. Compare that to my 16 GB flash USB stick. As they move to a smaller process, the memory density will increase geometrically.

So reader may be wondering, "Nice, but what does this have to do with energy?" It's a simple fact that renewable power supplies like photovoltaics or wind turbines are going to require control electronics household appliances in order to control the demand side. The first step is to have net and smart metering, and then link that to items like the air conditioner and refrigerator in order to create a pool of deferrable demand for the power utilities.

Let's say you have a refrigerator burning 400 kWh per year, that's equivalent to a constant power draw of 45 W. Does it make any sense to add 40 W of control electronics in order to communicate with the utility and cycle the fridge on and off as the wind blows? Obviously not. Hence the need for control electronics that barely sip electrons. Non-volatile memory is a big part of this. The items to look for are for low-voltage processors either with radically scalable clock speeds or multi-core devices where a slow device turns on the faster one, and highly efficient AC to DC power supplies.

Actually migrating from our current vampire appliances to something brighter is going to take a long, long time if we are relying on electricity costs and consumer awareness to do the job. For one thing, many appliances don't come with labeling that indicates their power consumption, and they should so a green consumer can make an informed choice. Practically, government regulation of electronics is required to encourage all manufacturers to develop low-power electronics. The objective would be to ensure that the leaders in power thrifty electronics aren't put at a competitive disadvantage compared to their lower-tech competitors, who don't have to put up the investment into R&D. Mandates have had enormous success in improving the efficiency of air conditioners and refrigerators in recent years. Electronics is a sector that needs much of the same.

Negative Capacitance Transistors
On the topic of low voltage processors, Sayeef Salahuddin and Supriyo Datta proposed in Nano Letters a concept for radically reducing the operating voltage required to switch the gate in a transistor (warning: math skills and subscription required for access). By way of reminder, the power an electronic circuit draws is proportional to the current and square of the voltage,

such that the voltage a circuit operates on matters a lot when determining power consumption, and how much heat needs to be extracted from it. Nominally, a field-effect transistor (FET) requires about 60 mV to switch. As electronics get smaller and smaller, the power density is increasing, which causes components to run hotter and hotter. The fundamental limitations to Moore's Law are not so much components getting down to the atomic scale but pulling the heat out before the chip melts.

What Salahuddin and Datta are proposing is to replace the standard insulting dielectric portion of the gate with a ferroelectric insulator (such as BaTiO3 that would exhibit 'negative capacitance' when placed in series with a regular capacitor. A negative capacitor is one where the charge stored decreases with increasing voltage. The authors show that such a device would basically act as a voltage transformer/amplifier, and allow the control signal that initiates switching to be much smaller.

This proposal is, at the moment, a theoretical construct. We will probably see one of the universities with extensive fabrication laboratories try to build an experimental device sooner rather than later, however.
Posted by Robert McLeod at 2/14/2008 4 comments: