EnergyPulse, home of a numerous dubious articles on the energy front, has a new article promoting hybrid cars with integrated solar panels (hat tip: Jim Fraser's Energy Blog). There's some confusion between Jim's post and the EnergyPulse article: Jim assumes EnergyPulse is talking about plug-in cars but EnergyPulse doesn't actually claim that the hypothetical solar hybrid car has a plug-in capacity in the analysis portion of the article. Maybe EnergyPulse thinks you would only plug-in at home or something, I don't know.

The article suggests that mounting a 150 Wpeak panel (nominal surface area of 1.2 m2 at 12.5 % efficiency) on a car will have a much better financial payback because rather than produce cheap grid electricity it replaces heavily taxed motor fuel. The confusion regarding the plug-in capacity of the vehicle becomes important at this stage: doesn't it make more financial sense to fill up the car with cheap coal electricity from the grid and just skip the solar altogether?

The first problem that we encounter is a claim that a Prius can travel 7 miles on 1 kWh of electrical charge. This number equates to 8.88 kWh/100 km, which is not realistic. Ben at theWatt.com has compiled some of the Environmental Protection Agency numbers and the best is for the Nissan Altra EV at 17 kWh/100 km.

The next problem is that the author assumes that the capacity factor for a car mounted solar panel will be the same for a fixed mount on a building. The obvious problem is that a panel mounted horizontally on the roof isn't going to be at an idea angle to collect insolation. Furthermore, cars spend the vast majority of their lives parked. What happens if you happen to park in the shade of a high-rise or a tree; park it in a garage or parkade? Photovoltaics don't do well if they are even partially shaded, since it leads to reverse current in the shaded sections that degrade the performance of the system as a whole. Basic trigonometry suggests that if you're in Los Angeles (33 ° N latitude) then a horizontal panel should only see cos( 30 ° ) = 0.866 as much radiation. In actual fact, due to the higher insolation in the summer, RETScreen says that the horizontal panel in LA will produce 271.5 kWh/year versus 297 kWh/year for one fixed at 33 ° to the horizontal. These correspond to a capacity factor of 0.2055 and 0.2260 respectively whereas the author assumed a capacity factor of 0.25 for both systems.

The real issue here is that a car-mounted small solar panel can't contribute even a small amount of the energy needed to actually move the car. Using HOMER (which allows hourly rather than monthly resolution) and solar data for LA in 2003 I found the total power generated by a horizontal PV panel to be 245 kWh/year (even lower than from RETScreen).

Because the PV panel can't supply enough energy to move the vehicle over short distances it makes no sense to invest in a battery pack if you don't also provide plug-in capacity. If you do provide plug-in capacity, why is it attractive to put the panels on the car rather than attached to the grid? If the solar panel on the car actually does fully charge the vehicle, it has no where to dump the power if it's not connected to the grid. It's not possible to simulate this case but obviously it's another argument against the concept. There are only one advantage to mounting panels on a car rather than on a grid-tied fixed mount: there's no DC-AC-DC conversion.

Let's try another tack: maybe the power provided by grid-tied panels couldn't be used while the vehicle is actually driving. E.g. the grid has no storage capacity and everyone unplugs for and at the exact same time. Let's presume that a vehicle drives an average of 20 km on electric power every day of the week. Using reasonable figures for consumption (20 kWh/ 100 km) that's 4 kWh a day. We'll presume that the battery can store 2.4 kWh and has a peak output of 75 kW (105 hp). Let's also presume that the car only moves between 8:00-9:00 am and 5:00-6:00 pm. We'll be nice and assume the car is not grid connected for the entirety of those hours. 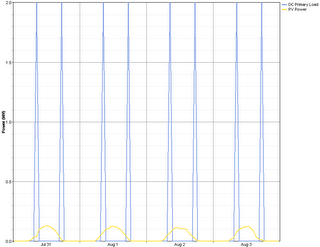 So what's the point in putting panels on your car rather than your garage?

Now why do you want to go and ruin people's delusions like that? :)

I keep postponing an essay that I intend to do on PHEVs that are indirectly solar-powered. I like the idea of solar panels on my house recharging a PHEV. But I guess one of the problems would be that I would be recharging at night and draining my batteries.

Why does everyone always assume one solution? Does having a solar panel on your roof, car or otherwise, mean that you can’t connect to the grid? The two work together perfectly with no down-side, other than cost. How much time do you spend sitting in traffic in the middle of the freeway (rare in LA I know)? Why not produce some power why you are at it? The idea is that once you start integrating power generation into the components that are using power, the sum of the parts makes a huge difference. While some persons tend to be a bit “optimistic” about the potential of alternative energy, it should not detract from the very real value that the various forms of alternative energy offer.

Mr. Obvious: "with no down-side, other than cost."

$$$ being the issue at stake. In spite of all the credit card applications I get in the mail, I do not have an infinite supply of cash and neither does anyone else. Leveraging your dollar to get the most kilowatt-hours is the issue.

Yes, it's not so easy to make new discoveries and also to implement them in real life and to make their usage cheap. But step by step it's possible to reach this goal. I'm sure, soon there will be found a way of effective solar power usage reagarding to cars, I believe it's not a nonsense.

Sure, Mr. Obvious's phrase, "no down-side, other than cost," presents a huge target. But does that mean we can't give him credit for a valid point? The conclusion "So what's the point in putting panels on your car rather than your garage?" is a false dichotomy, is it not?