BBC is apparently running a documentary called "If... the Oil Runs Out" which posits the idea of $160/bbl oil by 2016. I wondered if this was just another prediction someone had pulled out of their ass or if it might actually be an extrapolation from the current trend. I know Stuart Staniford at the Oil Drum has been applying a least squares linear fit but I wanted to see what would happen if I extrapolated it over twenty years.

Since about 2002 the oil market seems to have existed in a state where production capacity has matched consumption. The result has been three and a half years of very steady growth in the price of oil as growing demand meets an insufficient supply. Previously Saudi Arabia had maintained a production capacity buffer that doesn't appear to exist anymore. If conditions stay largely the same the price should continue on its fairly steady climb. 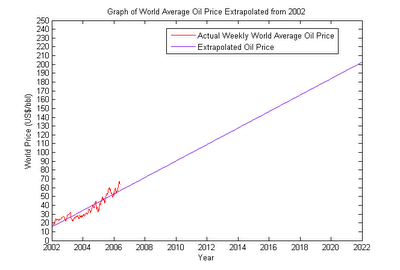 As it happens based on my fit of oil price data the BBC's number seems pretty fair. A word on the source of prices: I used the EIA world average, which is not the same thing as NYMEX Brent or West Texas spot prices. Typically the actual price of oil is less than the oft-quoted market rate.

The growth in oil prices should break when one of two things happen: there is a decline in production, which could lead to a shock event as seen in the 1970s; or high prices cause destruction in the consumption and/or new projects begin to come online in 2007/8 and restore slack in the market for OPEC to use.