It's often stated that trains are far more efficient in transporting freight than semi-trucks. Trucks remain the primary freight movers however because of their versatility. By means of an electricity analogue, trains do transmission but trucks can perform both transmission and distribution services.

I thought it would be valuable to look at the major reasons why trains are more efficient than trucks. There are three main areas to look at:
The air drag can be expressed as

The rolling resistance on the other hand is not very dependant on speed. Drag is usually expressed as

Transient accelerations basically refers to traffic and hills. Trains have right of way so they don't have to stop and yield to other traffic at any time. Their rail lines also tend to go through or around hills rather than over them. As such they do not waste energy by speeding up or slowing down unnecessarily. Regenerative braking can mitigate this issue to a large extent.

Let's take a look at an example for a car, semi-truck, and a 50-car train.


Trucks are less aerodynamically efficient than cars for a variety of reasons: their blunt front-end, many exposed turning wheels, gap between the cab and trailer, and the sharp back end. I don't really know how aerodynamically efficient a train is but I can guess that it basically creates its own wind. On rolling resistance trucks have a minor advantage over cars because they operate at higher pneumatic pressure. The steel wheels on trains don't deform at all so they are considerably superior.

The key point is in fact the length to cross section area ratio and its impact on aerodynamic drag. If we normalize the coefficient of drag by the L:A ratio the results for cars and trucks are on the same order of magnitude, 0.6 and 0.2 respectively. The train normalized drag coefficient is dramatically lower at 0.01. Essentially because the front cars will push the wind the remaining cars get a free ride against air resistance. This reduces the overall air resistance on a train per unit mass of cargo regardless of its aerodynamic shape. 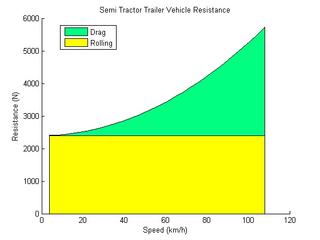 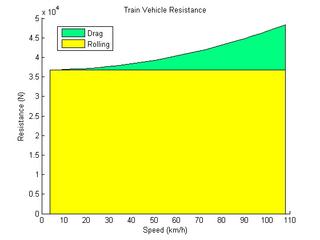 Train Resistance
The resistance at 108 km/h (30 m/s) works out to 0.16 N/kg for a truck and 0.02 N/kg for a train. In this estimate the train is about eight times more efficient. That matches well with generally quoted values. What's more significant is how the rolling resistance forms a much greater proportion of losses for the train compared to the truck. This underscores how the long length of the train gives it an advantage on the drag side of the equation.

Looks to me like you're missing a ½ term in your drag equation:

Mmm... stupid kinetic energy. My drag numbers don't make sense then. My area must be off.