A Candle that Burns Half as Bright Burns Twice as Long

My previous effort on the rolling and air resistance for trucking versus trains lends itself to an examination of dual-mode transportation. Dual mode systems typically allow a truck to run on rails in order to reduce the rolling resistance. An advanced and contemporary concept is the Bladerunner concept out of the UK. A mock-up of the concept can be viewed here.

The trucking industry is one that has remained practically devoid of technological advances over the past thirty plus years. The fuel economy of transport trucks hasn't improved at all since 1980 (as far back as I have data). This is pretty surprising given that the cost of fuel is currently about twice the pay of the driver when driving at highway speeds. The mean pay for a trucker is $16.00/hr whereas a 5 mpg truck driving at 55 mph burns around $33.00 of diesel. I don't know what exactly to make of the lack of imagination.

I'll use the following assumptions for my hypothetical truck:

The first and most obvious point of improvement is the aerodynamics. The drag coefficient for semi-tractor/trailers runs about 0.7 which is nowhere near the level obtained by modern automobiles (0.3). There's no real reason for trucks to be worse. In fact the Bladerunner concept shows a great deal of improvement in aerodynamics. They lowered the profile, improved the nose, eliminated the gap between the tractor and trailer, added aerodynamics to the wheels, and smoothed off all right angles.

This yields a pretty impressive drop from 6900 N overall resistance at 110 km/h to 4400 N which should result in a 55 % improvement in fuel economy. This can be achieved by cleaning up the aerodynamics of trucks to passenger car levels. I'm not taking into account the lower profile of the Bladerunner which would reduce the frontal area exposed to drag. 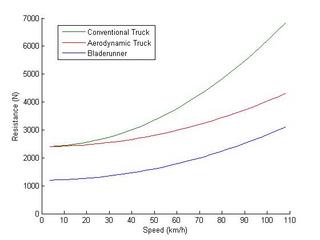 So if we compare our aerodynamic conventional truck to our aerodynamic Bladerunner the overall resistance is 4400 N and 3200 N respectively. The improvement in fuel economy is now 37.5 % which may be respectable enough to be economical. The full Bladerunner (3200 N) versus a contemporary (1970-tech) truck (6900 N) represents a fairly vast 115 % improvement. Cutting fuel consumption from truck shipping in half would represent a great reduction in the demand for petroleum.

Practically speaking in order to get the absolute best performance you would want Bladerunners to run in convoys so close together that they would be able to draft off each other. In this case the leading truck would have the hardest drive and the others would cut a break off his slipstream. Since this isn't exactly safe nor fair for the leading vehicle the obvious solution is to actually couple the vehicles in a convoy into a road/rail train. This would require a good communication system amongst the drivers if you wanted to be able to shift trucks in and out of a convoy on the move but it could certainly be worth it. If the vehicles were also hybrids driven by electrical motors then it would also be possible for the trailing vehicles to transfer power to the leading vehicle. In this case the following vehicles could completely retract their rubber wheels from the ground and travel solely on their steel bogies.

The other question to examine is how much is a driver's time worth? We can clearly see from the numbers that from a fuel economy perspective driving 30 km/h slower cuts the drag approximately in half. The disadvantage is that the driver must be paid more to drive more hours and the load will take a little longer to arrive. We can probably discount the amortization of the vehicle itself because that will be based on distance and not time traveled.

At a pay rate of $16.00/hr the marginal cost of slowing down 30 km/h is $6/hr or $0.075/km. With our current bad performance truck fleet slowing down by 30 km/h will shave off about 2100 N resistance, or 2.1 MJ/km. If we have a 30 % tank-to-wheel efficient engine (high side estimate) then we are reducing our burning of diesel by 7.0MJ/km. Diesel has an energy content of 46 MJ/kg and costs about $0.70/kg in the States. Hence our savings for traveling slower works out to $0.107/km. We're saving almost three cents a kilometer by driving slower. These numbers don't work out quite so well for the Bladerunner obviously. The efficiency gains will offset the economics to allow driving at a higher speed.

UPDATE: A quick check of my resistance numbers (6900 N at 30 % engine efficiency) show a burn rate of 23 MJ/km or half a kilogram of fuel. This works out to 4.3 mpg which is less than the fleet average of 5.3 mpg. This would be the case for driving in a straight line without any traffic or stops or hills etc. On the other hand, my truck is heavily loaded. The numbers seem reasonable to me although they could no doubt use some improvement.

Stuart Staniford at the Oil Drum put up a post about the fleet fuel economy numbers. I encourage readers in particular to look at the graph showing fuel economy for trucks. It's flat.

It may not be necessary to mechanically couple trucks to form a train; adaptive cruise control is already good enough to do close following for cars, and signalling via WiFi, Bluetooth or the like could allow all vehicles in a train to coordinate their speed changes.

What would it take to break a truck out of a train?  Slowing the train to ~20 MPG over a section with pavement between and alongside the rails, the trucks in front move ahead to make some space for visibility, the exitting truck pulls up the rail bogies and exits to one side, the trucks behind re-close the gap as the train accelerates to speed again.  Seems like a straightforward problem with a fairly simple solution.