Mmm... butter, one of the tastiest of all fats. It also happens to be one of the most nutritious forms of dietary fat, containing the fat soluble vitamins A and D in their animal usable forms. It is also a good source of vitamin K2, which regulates calcium metabolism; K2 has become quite rare in our modern diet with its lack of fermented foods. Unfortunately, butter does contain some milk solids, so if you are gluten intolerant you may also be intolerant of the α-casein that makes up some 80 % of cow milk proteins. It also contains a little bit of lactose, which might make someone with lactose intolerance hurl. What to do? Why remove the milk solids of course. This process is called clarification and can easily be done on the stove top. The finished produce is often called Ghee, as it was once a staple of Indian cooking.

An additional advantage to clarifying butter is that it does not brown or burn nearly as easily so cooking with it at high temperatures is safer. Traditionally ghee is often flavoured with cinnamon or cloves. Incidentally cinnamon is a folk-method for treating diabetes; it has an insulin-like effect in addition to being high in chromium.

I typically clarify two pounds of butter at a time. Since the volume of the butter will be reduced by about 1/4 (primarily water and the filtered milk solids) this yields about 750 mL of high quality cooking fat. You'll want the following ingredients and apparatus: 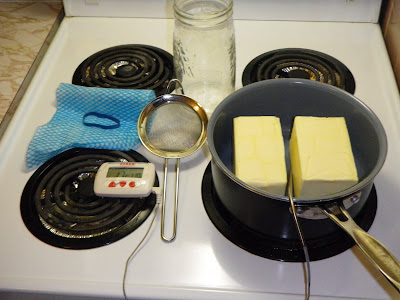 First start by melting the butter in the pan on low. As it melts to cover the bottom of the pan you can turn it up to medium and stick your thermometer into the oil. Set the alarm to 110 °C (230 °F). You don't want to use high heat here, as there's only a limited amount of water in the butter so it's mostly just a matter of time for the oil to heat up.

When water evaporates it takes away an enormous amount of heat, so the temperature of the ghee will stall a bit at or just above 100 °C (212 °F). At this point, the butter will separate into its three constituents: the milk solids, which will settle on the bottom, the golden-coloured oil itself, and a layer of foam on the top. 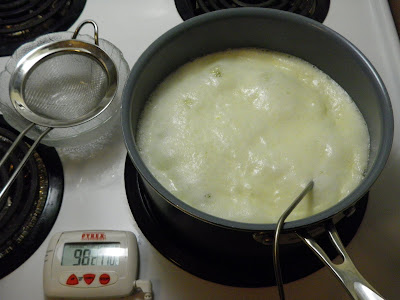 The foam does not contain casein, but it is unsightly and we want to get rid of it with our strainer. Just skim around the top, and then wash the strainer off with hot water. After 2-3 skims, you should have a cleaner looking product. 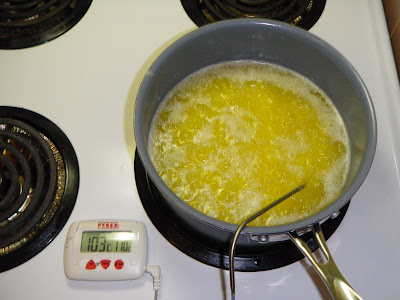 After cleaning off the foam you are essentially just boiling away the water content of the butter. Honestly if you know what you're doing and watch the butter carefully you don't need the thermometer. As the oil heats up, the bubbles will get smaller and smaller. When the oil stops bubbling, that means all the water has evaporated and the temperature of the oil will start to rise very quickly. When or if the milk solids at the bottom of the pan start to turn brown, remove the pan from the heat immediately. I generally wait until 125 °C (257 °F) to finish heating. 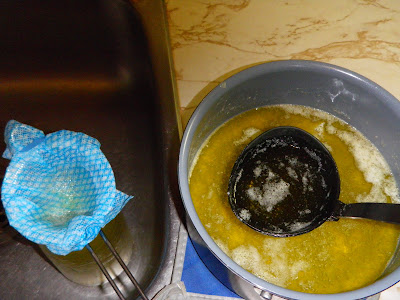 At this point it's time to transfer the clarified butter into your jar. I use terrycloth instead of cheese cloth for a few reasons. One, it is far cheaper and easier to find. It's even reusable, and it seems to do a better job of filtering the milk solids than cheesecloth. I do wash it beforehand. The elastic is wrapped around the base of the strainer to hold the filter in place.

That's it! Now just cap your jar and clean up. The hot ghee will be transparent and look a fair bit like thick urine. If any milk solids did make it through the filter process, they will settle on the bottom. As it cools to room temperature, it will become more solid and turn a pale yellow colour. 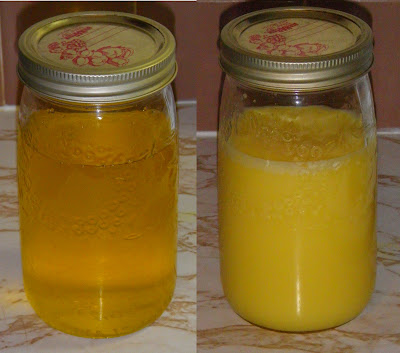 Ghee is shelf-stable although I would store it in a cupboard away from light. It can be refrigerated but it becomes very hard at colder temperatures and impossible to get out of the jar with a spoon.

If you can't afford high-quality grass-fed organic butter (I certainly can't), you may want to consider adding vitamins D3 and/or K2 if you can buy them in drop form. Add them to the finished ghee in the jar and stir.