If you have a passing familiarity with energy policy, you probably are aware that the scale of potentially available resources is enormous. For example, the USA is purported to maintain coal reserves sufficient for 250 years of consumption, or 1600-3600 billion metric tons. From wind, the total world resource that is considered to be commercially viable is about 72 TerraWatts. However, that figure only includes the wind resources that exceed some average velocity (probably 7 m/s) so the actual total resource is somewhere around 500 TW. An enormous figure.

The viability of renewable power is largely a function of the price of fossil fuel commodities, the action of government in regulation and subsidy/taxation, and the technology level of the renewable sector. The conception that renewable power will be composed of a mélange of many different sources does not fully illustrate the likely outcome.

The term, commercially viable, then is key. What matters is not how big a resource is in absolute terms, but how that resource is distributed in terms of quality relative to alternative energy resources.

One possible metric for energy resource quality would be the EROEI (Energy Return On Energy Invested) which is especially popular in the Peak Oil community. It is an expression which can be derived in engineering terms so it is quantitative. However, the metric that really matters is the economic one: how many dollars do I have to spend to get my unit of energy? How can I further parametrize an alternative energy resource to evaluate when it will become economical to exploit?

Inertia and vested interests will have an influence over the short-term but eventually the cheaper source of energy will win. It's much more fuzzy than EROEI, since adding money adds many more degrees of freedom (i.e. value of fiat currency, cost of credit, cost of technology, etc.) and anything money related has a big rationalization factor, but it's fundamentally closer to the truth. If the EROEI metric was the determining factor, we'd all be powered by hydroelectric dams (and yes I am aware that after you amortize, hydro power is dirt cheap... smart ass).

The real metric then for energy quality is going to be the rate of return in dollars, not energy. Unfortunately, dollars per unit of energy is going to be a datum with many degrees of freedom behind it, making analysis complicated and prone to change on a month to month basis. Still, we can construct some hand-waving arguments based on best guesstimates to make some general conclusions. 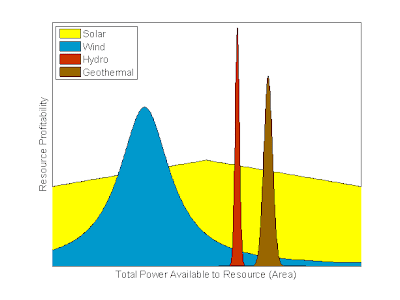 Figure 1: Schematic of renewable energy resource economic distribution. Not to scale, seriously based on established data, etc. but rather a illustration for the eye. There's no reason for these curves to be symmetrical, it just looks better.
Most resources can be described as a sharp peak with heavy tails. For wind, you have some select areas where the terrain funnels katabatic winds coming off of mountain ranges and you find a strong, consistent wind resource. On the other hand, much of the Earth is covered in forests which increase the surface drag and results in a poor quality wind resource. On the geothermal power front, you have a few select areas where vents circulate magma from the Earth's mantle near to the surface and a lot of heat power can be extracted. However, most deep geothermal is going to be pulling heat energy out of the crust which isn't replenished quickly. Most rocks only conduct around 30 mW/m2 so it's easy to exhaust the resource. It's not clear, then, if deep geothermal can easily amortize the capital costs of drilling. Solar is an exception, in that not only does it dwarf all other resources in total potential but it's also very stubby.

If you look at the scale of various renewable and non-renewable power sources it quickly becomes obvious that solar dwarfs them all. There is about 190000 TW of solar power incident on the earth at any one time. Even when you factor in scattering from the atmosphere and clouds, it's still ~ 125x greater than the wind resource. Moreover, solar is also the most uniformly distributed. The best solar resources in the world, such as Arizona and North Africa, only receive about 3x more power than cloudy Northern Germany. This means that any graph of solar resource quality as a function of the total available resource is very squat and shallow. It's the Olympus Mons of power quality-potential curves. So why am I going on and on about solar? Well, it provides an economic floor to all other sources of power. Any portion of a resource that economically falls below the top of the solar curve, won't be significantly exploited, due to the extreme width of the solar curve.

The significance of the above statement is mostly of interest as a tool for formulating public energy policy. Should all alternative energy technologies be pursued with the aid of the public purse? Primary research at the academic level should not be funded on the whim of politicians, but when it comes to issues like production subsidies, the introduction of politics is unavoidable. Thus, I would like to propose a check-list for all those prospective deciders out there (and of course investors in the private funding world):
And what of the non-renewable resources? Well those curves are actively being consumed, with the highest quality reserves (i.e. the peaks of the mountains) going first. Of course, with improving technology, their are fossil reserves that are becoming more economic at the same time. It took a fairly enormous investment to get the oil sands of Alberta viable, but here we are now, making oil from asphalt.

There are also a number of more auxiliary issues that can have a significant impact on how edit( economical a particular technology can be in a given locale. Some are simply a function of geography, such as how concentrating solar power only works in terrain that sees little cloud cover. ) These parameters make the situation fuzzier than before, but we can at least account for them in some qualitative, if inadequate, sense. An example that I've discussed is the increased speed of deployment and improvement of energy technologies that can be deployed in an incremental fashion.

Inertia of existing technologies is one of the most important parameters. Inertia in terms of an existing energy technology can be summed up as: embedded capital costs. As an example, buying an electric car or a plug-in hybrid costs quite a lot of money. Even buying a depreciated used SUV compared to a new Prius requires a huge number of miles driven to recoup the price premium between the two. The nature of inertia means that as the best of the fossil resources continue to be consumed, there will naturally be some overshoot before the renewables come to the fore.

Arbitrage opportunities should also be a great way of making money in the future. The giant disadvantage of renewable technologies like photovoltaic solar and wind is that they are not dispatchable (and in the case of wind, not reliably predictable). If 100 % of your generating capacity has to be backed with natural gas turbines, that adds a great deal of capital cost to your power generating infrastructure. I.e. it makes wind more expensive than the cost of the turbines alone would imply. However, balancing supply and demand with a reserve of turbines is probably the most expensive path you could take.

If you are an investor and want to start a new thin-film photovoltaic company, you are probably too late to catch the leaders. The depression of global trade and financial services will slow down the existing photovoltaic manufacturers, but you still have to navigate an uncertain minefield of failed technologies and patents. However, there's still plenty of opportunity to find niche applications to match daytime electricity generation to nighttime demand. Plug-in hybrids are generally seen as an excellent means of smoothing out the supply and demand curves, especially because they can justify a higher battery cost since they are purchased primarily for driving and not regulating the electrical grid. There are also other demand shaping potential means of arbitrage out there.

I really don't care for your profile photo. Other than that, I've found your blog to be interesting, informative and thought provoking.

We all have our little eccentricities...

I'm really glad you posted this. I did a little digging in '07-'08 regarding alt energy and your point re solar stuck out rather quickly. However, it seems whenever I commented in various fora, no one saw it that way, including people who were apparently expert in the alt energy field. Most discussion seems very short term focused - today's technology and infrastructure. And for some odd reason wind gets lots of attention.
Since then I have been interested in a couple of solar concentrator technology start ups. One reason is due to the scarcity of things like indium.

That's the dog that's in Guinness as the ugliest dog in the world.
It's like a group of very creative guys got together to draw up the ugliest thing they could ever think of. Except this poor guy is actually real.

Holy uh ... moly ... I didn't believe the story about that being a real dog and the "winner" of the ugliest dog in the world contest, so I entered the photo url from this blog into www.tineye.com (an amazing reverse image search engine) and, sure enough, snopes came up and says it's true.

And other than wikipedia, where can you find more truth than snopes?

I apologize for hijacking your blog post, let me tell you that I am a regular reader, I've subscribed. Hopefully that will assuage any hard feelings you may have form my non-sequitur comments.