Mix one part water, one part Gulf crude, and one part pulverized enriched uranium in a silicon barrel. Stir with a wind turbine blade and serve piping hot. Warning: may cause urges to clear brush

In the future we can assume that electrical power will be generated by a melangé of sources:I've been meaning to write a post that details a hypothetical future power mix where a large proportion of electricity is generated by renewable sources. For whatever reason, I've now finally gotten around to it. The objective of this post is to take some demand data, generate some supply data for renewables, and mix it all together in order to get a grasp of what the general case might be.

I picked Texas as a source of electricity demand data simply because the information is published on the web. I used the data for June 15th, 2006 but then scaled it up so that the maximum demand for the day was 100 000 MW.

I then tried to meet this demand with 35 000 MW of nuclear power, 120 000 MW of wind power, 75 000 MW of solar power, and 65 000 MW of hydroelectric power. The wind data is simulated but the solar data is real, for San Antonio in 2003. In order to try to smooth the data to reflect geographic distribution of wind and solar farms I averaged the daily wind speeds and insolation for five days spread over a total of five months. I think it is a reasonable approximation to use temporal averaging to imitate geographical averaging. In spite of averaging the data over such a long period there's still a considerable bottoming out in the wind power production at 5:00 am. This is an irritating part of the nature of wind: it is unreliable and hence must be backed by spare capacity from other sources.

Once the nuclear, wind, and solar power production was all accounted for I used hydroelectric power to fill in the gap (when it existed) between supply and demand. The objective is to preserve the water in the reservoir (or natural gas supplies) whenever possible. This allows us, essentially, to trade some of the inherent power quality of hydroelectric to the low power quality renewable sources. 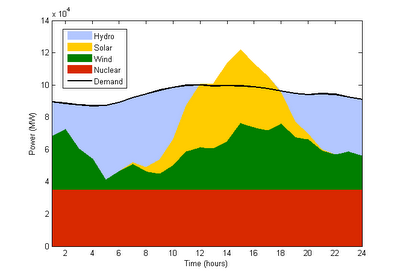 Figure 1: Simulated electricity production to meet Texas mimicked demand.
The results are fairly intuitive. Base-load power provides the solid bottom portion of the power mix. Wind is chaotic. Solar correlates mildly with the daily peak in demand, but not as well as we might want. The correlation could actually be fooled with by adjusting time zones.

There is some excess power produced during the day, although it is a relatively small proportion of the total (2.3 %). This is a result of the unpredictable nature of wind as much as anything else. While solar can be forecast relatively well, wind cannot.

There are certainly a number of notable facts to take from this little simulation in a day in the life of Texas electrons. One is that the need for scalable power is quite high (~ 25 %). For a nation like the USA, which is poor in hydroelectric power, it implies that they will continue to need to burn large quantities of natural gas for electricity in the future. The other is that with the widespread deployment of renewables you are almost guaranteed to produce more power than you can use on a common basis. It would be very nice to incorporate power storage solutions like pumped hydro or flow batteries into the grid to utilize this excess power but my past work generally indicates that stationary arbitrage systems have poor margins. The next step past storage is deferrable demand, generally in the form of plug-in hybrid or electric vehicles. A plug-in hybrid does not need to be fully charged from the moment it is plugged into the grid because it has a backup chemical fuel supply. Instead it can wait and accept energy only when the grid is saturated and presumably get a cheaper rate for its trouble. In the case of a plug-in hybrid, the battery is purchased not for the primary purpose of conducting arbitrage but instead providing power for a vehicle. In a sense, the secondary benefit to the electricity grid would be subsidized by personal transportation.

You've only got half the equation there.  How does the demand mix change with time of day?  What needs to be served immediately, and what doesn't?

Some forms of existing (not future) demand are deferrable too; A/C is a big one.  If ice-storage A/C is widely used, most of the A/C load could be put off until the wind is blowing or some slow-reacting powerplant can be ramped up to serve it.  The same may be true of at least some electric water-heating load, and utility control of water heaters is already available.

I have already largely addressed this in a prior post while you were out cavorting with jury-rigged Cat-5 :

Essentially, I see the passivehaus concept as beating thermal storage to death. If you cut off the need for heating and cooling at the knees then there's relatively little value in pursuing a deferrable load strategy.

Hot water is more debatable because the gains that can be made with regard to efficiency are marginal. If you consider that hot water is approximately 20 % of residential energy use and the residential sector has a 20 % share in the energy pie then hot water is only 4 % of the total. Of course, with the introduction of conservation strategies − such as minimal efforts such as water saver shower heats or insulating your hot water pipes − the absolute energy consumed by hot water should drop (although its relative per centage could increase).

It's important to remember that the current demand curve is artificial, becaues demand-management isn't new.

For instance, a lot of steel mills move their heavy-duty electic demand to the night.

I think you're omitting the dimension of time (years, not hours).

Building stock is rotated very slowly compared to vehicles.  Major components like water heaters are rotated roughly as fast as vehicles.  If you can retrofit the A/C and DHW systems in the next few years, they'll provide the efficiency and DSM needed to tide the building over to the next major remodeling; in the mean time, PHEV's will be taking over.

Ideally the systems would be modular and reusable between buildings, so that the investment in ice-storage A/C makes sense even if the next remodel is only 5 years or so away.  Units freed by remodelling would be passed down the line.  Besides, A/C is one need that doesn't go away with efficiency; you can trap the heat of activities and occupants and stay warm with arbitrarily little, but that doesn't work for staying cool.

(That was one of the posts I wanted to respond to during my network troubles, but couldn't because the Captcha was killing me.)

I'll certainly concede your point. Areas like metal refining and pulp and paper routinely call the power company before they start drawing large amounts of electricity. Estimating the proportion of the power pie that is load managed in this way would be difficult. At some point in the future I will run a power mix simulation with varying levels of demand being deferrable.

I don't agree that cooling won't benefit greatly from conservation. Take your standard Florida home. Is it insulated? This is not in jest; most are not. A home that requires a 2.5 ton air conditioner might only need a 0.25 ton air conditioner if it has a full range of efficient appliances and insulation from the outside world.

Consider, for example, I've replaced a 60 W incandescent bulb with a 15 W fluorescent. Now, not only am I saving 45 W in electricity but I'm also reducing the amount of work my air conditioner has to do. Assuming a COP of 3.0 then the air conditioner has to do 15 W less work. So from my original 60 W (lighting) + 20 W (associated cooling) power draw I now only need 15 W + 5 W.

I think you are also largely ignoring my point that producing ice from peak solar power during the day damages the coefficient of performance of your heat pump. At some point it is more cost efficient to conserve and simply overproduce power through wind and solar.

Thanks. Don't forget that a big part of my point was that the daytime peak is lower, and the night time base load is higher, because of current demand management.

If solar took off it would be easy to move nighttime demand to the daytime, and there would likely be much less demand for natural gas to handle the peak.

For the same reason, I wonder if the need for "base-load" nuclear and coal is exaggerated by planning on the basis of existing demand curves.

We have to keep in mind that existing demand curves have been adjusted to meet the needs of coal and nuclear.

Robert - excellent posts. I started a simulator of wind and solar. I obtained the wind and cloud data for the last 10 years for my corner of the world and I was going to see how the capacity factor of the entire system was increased over a single windfarm. Anyway hopefully I will pick that up again soon.

Battery life is closely related to discharge depth and battery chemistry. Lead Acid certainly will be have to limited to 50% DOD to increase service life. You should be able to set the depth of discharge of your car when you sign up for it to be used a storage. The new A123 systems lithium battery will have thousands of cycles and will not be such a problem.
http://www.a123systems.com/html/news/articles/051102_news.html

I think a combination of the 2 ideas will work just a well. Deferred demand will complement storage to maximise the nodes battery life.

Thank you for reading my posts.

It's hard to see how the CoP of a solar A/C would be reduced by daytime temperatures when it won't operate at night.  Just sayin'. ;-)

I think Solar power competes with other energy sources as it is essentially infinite, so it never runs out, unlike fossil fuels. The amount of solar energy intercepted by the Earth every minute is greater than the amount of energy the world uses in fossil fuels each year. And moreover combined with other technology, solar power could be used for small but important jobs. In reality, solar power may not provide enough energy for ALL of our energy needs. But it could provide be a large percentage energy source. Coupled with nuclear power, wind power and water power, we could stop global warming.

It amazes me how we will spend billions on defense and war and the technology advances daily but we have not yet conquered the energy problem, the energy companies and subsideries charge far too much and have too much influence with goverment, we should be able to run our cars, our heaters and our air conditioning units without worring about paying the bills, we are now in the 21st century and should have cheap energy not ever rising cost energy, something is wrong, we should harness wind and solar energy, but we must have already found away to use the oceans around us, I think they may hold certain technologies back for economic reasons, and because of corporate pressure.