My posting has been a tad, umm, sparse, lately thanks to my physics graduate courses but I'm done that now. As it is, I did do one project that would be of interest to my readers.

As it happens one of my projects involved electron microscopy of tungsten disulfide (WS2). Tungsten disulfide has a crystal structure of sheets tungsten sandwiched between layers of sulfur. The structure is hexagonal in nature, like the graphite phase of carbon. The tungsten forms covalent tetrahedral bonds with two outer layers of sulfur [Figure 1]. The sulfur layers then form weak van der Waals bonds between them. Tungsten disulfide is one of a number of metal dichalcogenides (I can't pronounce it either) compounds which have the form MX2 where M is a refractory metal such as molybdenum or tungsten and X is sulfur or selenium. As one might expect from the crystal, WS2 shares many of the properties of graphite.

Having a similar structure to graphite, WS2 can form some of the same structures graphite can, namely fullerenes (buckyballs) [Figure 2] and nanotubes (not shown). 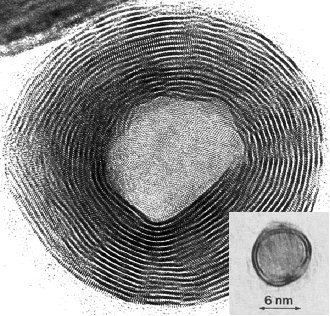 WS2 is primarily used as a dry lubricant, because it has a tremendously low coefficient of friction. The van der Waals bonds between the sulfur sheets can be easily broken by shear stress and slide against each other. WS2 doesn't decompose until it reaches 1270 °C so it is effective in extreme thermal and pressure environments. One example is satellite applications, where the lubricant is exposed to vacuum and temperature extremes when in the Sun and Earth's shadow.

However, we were interested (indirectly) in the catalyst performance of WS2. Local researchers of at the University of Alberta along with Syncrude have made theorectical investigations into the suitability of WS2 and other tungsten-based catalysts for upgrading and desulferizing heavy oils (read: tar sands). To quote the authors' introduction:

The hope is of course that WS2, with its capacity to form complicated nanostructures, may be an idea choice for breaking up aromatics (like benzene). Aromatics typically do not combust well in engines and happen to be carcinogenic. As my readers should know, upgrading bitumen from tar sands developments is a very expensive proposition that results in increased greenhouse gas production for synthetic oil versus light sweet crude. Reducing the energy inputs required for hydrogenation, reducing the sulfur content of the fuel, and reducing the aromatics content of the fuel would all have positive environmental impacts if we insist on burning liquids fuels to power transportation in the future.

My images are not nearly as good as the published ones above since I'm using an older microscope (JEOL 2010) designed for spectroscopy applications rather than high resolution. The resolution limit of the microscope is around 0.3 nm, while the lattice fringes you see in the images are about 0.615 nm apart, so it's no mean feat to acquire a good image. I did find a couple of interesting features. One, the particles like to clump together into large aggregate masses. I assume that the facets are forming van der Waals bonds with their neighbours. This is a bad this for catalysis because it decreases the available surface area. Second, the particles come in two basic types: onion-like spheroids and cigar-like minitubes. Pretty much every particle I imaged had many nested layers to them; for a catalyst, the inner layers are essentially wasted material. 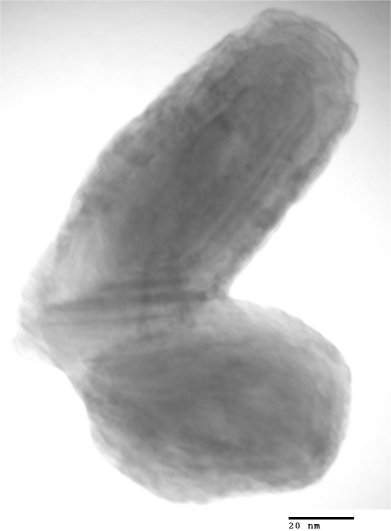 Figure 3: at 600,000x magnification we see a strange bonded particle. 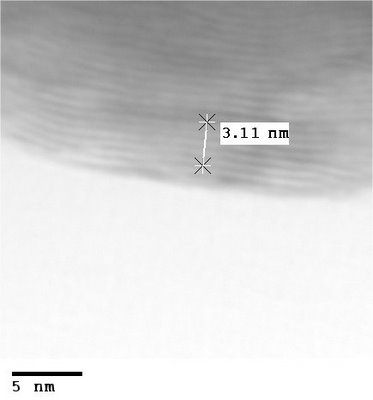 Figure 4: Lattice fringes become visible at 1,500,000x magnification. The contrast is poor thanks to environmental conditions (noise and vibration) as well as the limited resolution limit of the microscope.
My images, you will notice, aren't up to the level of the ones I borrowed from the literature. Fortunately, we will be receiving a brand new ($$$) Hitachi HF3300 electron microscope in a couple of months which will be more than capable. With holography techniques it should be possible to image the electric field around the particles (assuming I am inclined to continue with this line of research). This is very relevant to determining how these catalytic materials actually work to boost reaction rates.